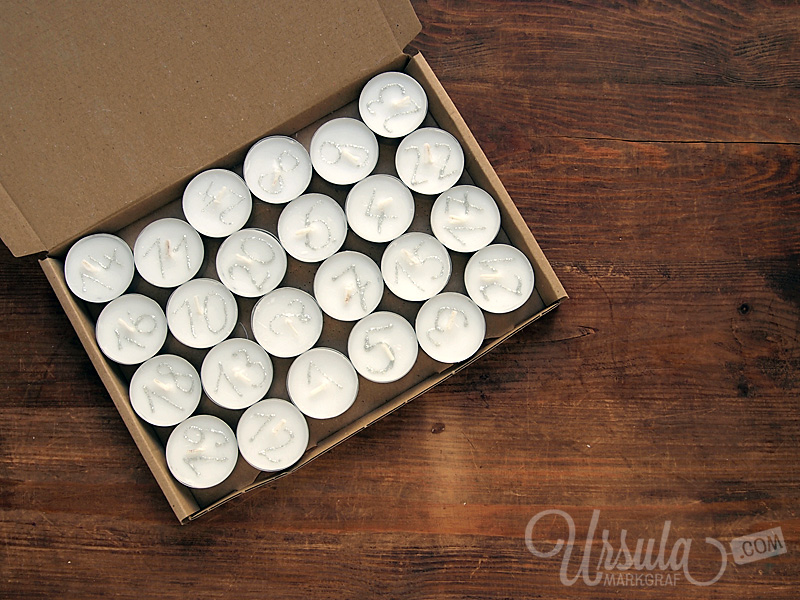 Today I have a little tutorial for your for a very sweet gift idea. It’s not my typical “thing” as it doesn’t involve any paints or such … but it’s quick and easy, you can send it via mail and even kids can help. So I just thought I had to share.

As you can see in the photo above I made a little tealight Advent calendar with this idea and mailed it out. But you can also easily create candles with your wishes for a new year for New Years Eve or candles with secret messages, wishes or even gifts for birthdays or just because … I love that the tealights look like ordinary tealights … until you light them and they burn for a while and reveal the secret message.

-tealights
-paper and a dark pen
-scissors
-optional a Candle-Liner 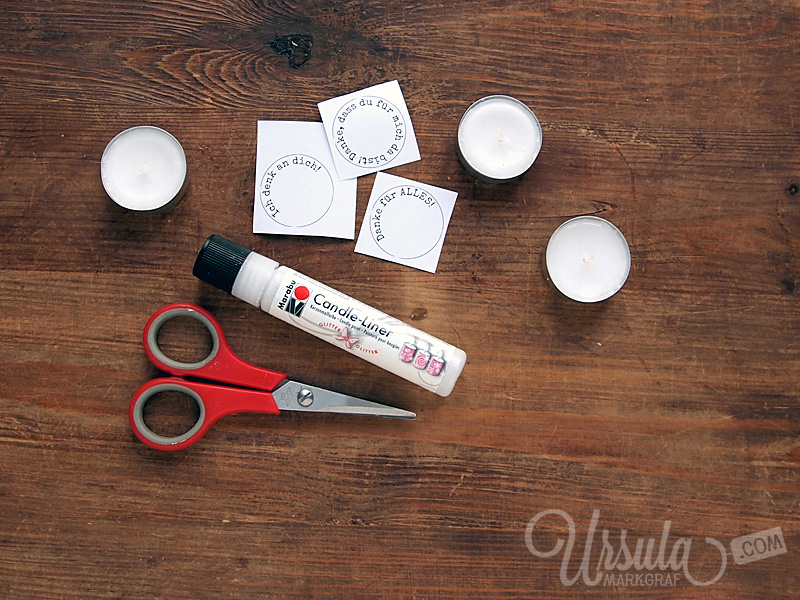 First you cut out the message. You can print out the pdf below if you like and write your message into the circles. But of course you can also simply draw some circles (a bit smaller than your tealights) on some paper and write down your message on those.

Hint:
I wouldn’t recommend writing your message in the middle of the circles as that’s where the flame of your tealight will be and that might make it hard to read. Also, you should use a darker color to write down your message so it will be easy to read it through the liquid wax. A light pencil does not work too well.;-)

Once you cut out the message, take the candle out of the metal tealight capsule. Put your paper into the capsule and put the candle back on top. Done!

Hint:
With some tealights you can very easily take the candle out of the metal capsule. With some it takes a bit more persuading. If possible already check when buying them whether you can disassemble them easily. I had some that were quite persistent not to be parted …. so I actually needed some metal pliers to persuade the candle to come out of the metal … 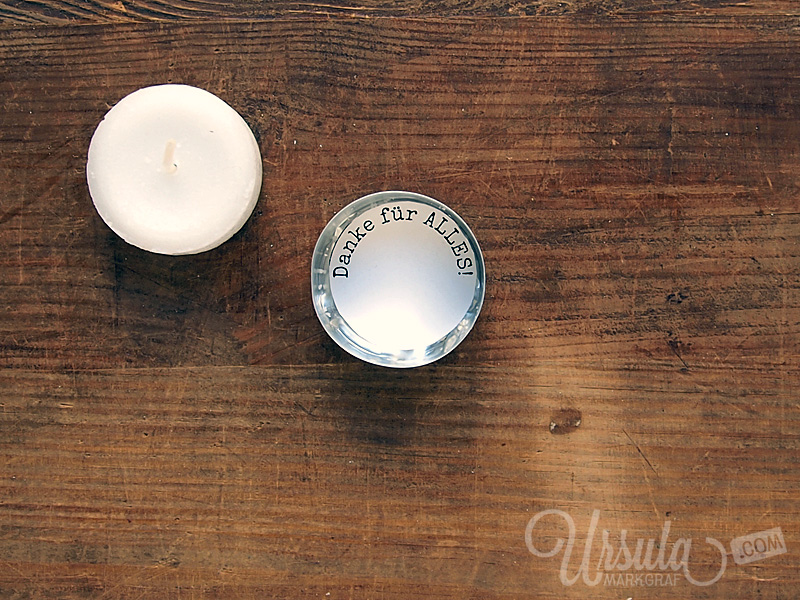 If you wanna make an Advent calendar then you need to make 24 (or 25) tealights with secret messages. Once you’re finished you can write the numbers on top of the tealights with a Candle-Liner. I had a glittery one, which I really liked. But you can of course also use any other color. I think red would also be very pretty for example.

If you just wanna give them as a gift, obviously you can make any number you want. And you can either draw little symbols or such on top – or just leave them as they are. I would however recommend to add some sort of instruction to them when giving them as a gift as they really look just like ordinary tealights and really takes some time until they reveal their hidden secret. And it would be rather sad if the person you gave them to missed their secret message just because they didn’t expect it … and didn’t look. 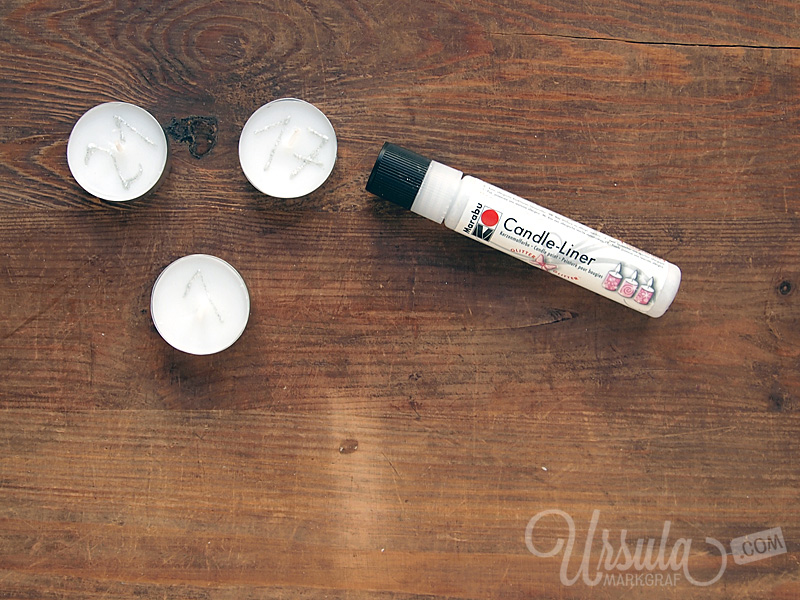 What do you think of this idea?

Write me a comment and let me know who’d you like to give a tealight with a secret message to?

Or tell me what little gifts that are easy and quit to make you like to give?

P.S. Here’s the pdf – just right-click and choose “save as”. Have fun creating!

Honestly, I am not a huge fan of Valentine’s day. But I do love to make people feel special. Putting a smile on someone’s face is just wonderful. Telling someone with a little something that you care. Showing someone that they are appreciated. 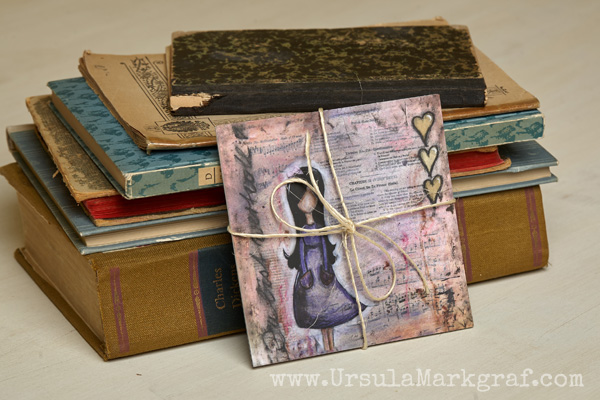 That is why I created my new postcard collection with some of my mixed-media art on them. To tell someone with a little card that they are loved. (The writing on the left side of the art piece reads “Du bist geliebt” which is “You are loved” in German.) 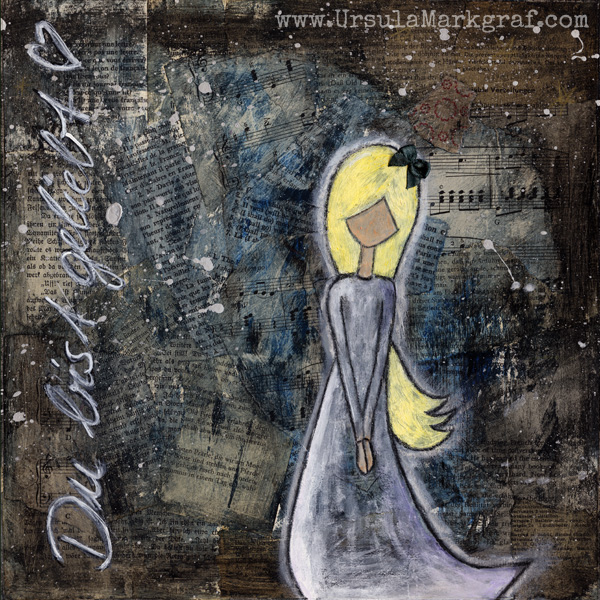 To remind them that they are worthy. (“Du bist wertvoll” in German.) 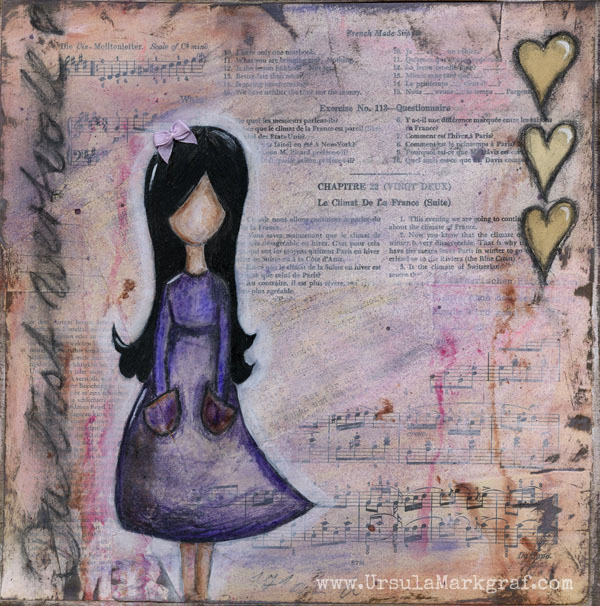 To make sure that they never forget that they are free. (“Du bist frei” in German.) 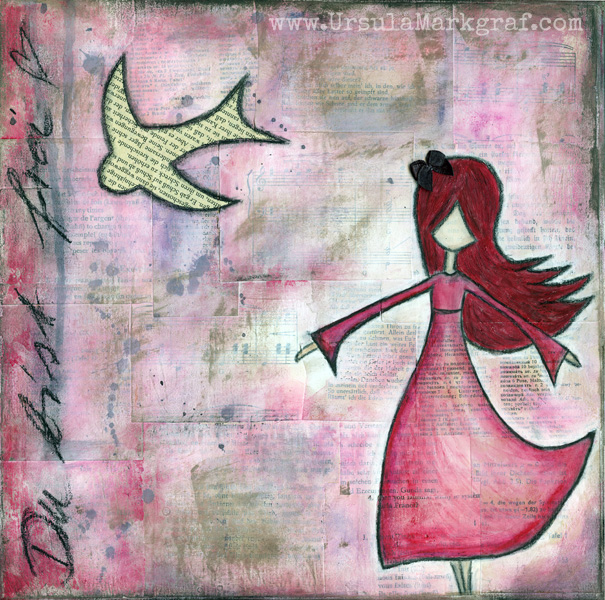 What do you think of my square postcards? 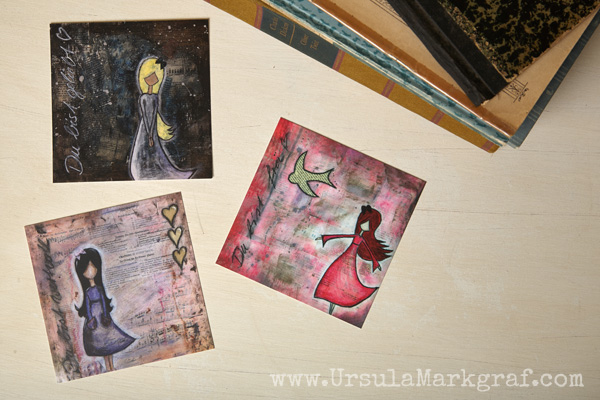 Of course you can see more pictures of the postcards in the SHOP. And as the postcards are brandnew they will be available for a reduced introduction price until the 21st of February, 2015.

Who would you want to send one to?