By Ursula Markgraf | November 30, 2010 - 20:31 |May 6, 2018 Tutorial
So today was the day when my daughter was allowed to open the first door of her Advent calender. Or rather the first sock. ;-)
If some of you are REALLY late with their calendar – well, here is one that you can do in almost no time! At least if you do have enough socks around. :-)

You need:
– 24 socks
Preferably sock that are too small for your kids – otherwise someone might be searching for them ;-)
Babysocks look REALLY cute!

– some type of cord or string
– optional: number stickers or paper, to write numbers on

Fill the socks with whatever you want and put them on the string/ cord with the pegs. Add some numbers if you want to. Done.

For the numbers I simply cut out stars with a hole punch and wrote the numbers on the stars.
(You can not see that in the pic above as I took the photo BEFORE I finished the numbers.)
I just added another photo below WITH the numbers …
I added the stars to the sock and cliped it all together with the cloths peg.
You can leave off the numbers if it does not matter in which order the socks are emptied.

My kids are not getting any chocolate or candy in their calender. Each sock holds a paper slip which has one activity on it. My daughter loves it! Last year’s favourite was
“Have hot chocolate with whipped cream”
:-)

Today the slip read “Write down a wishlist for Santa Claus”
You know what my daughter said after hearing that?

“I can not write that list today. First I have to finish looking through all the toy catalogues!”

Well, that much about making an informed decision … :-D 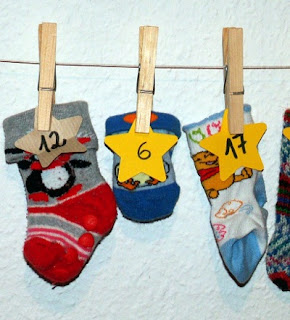 If you need some ideas what to write on your paper slips there is a whole lot out there in blogland. If you are interested I can also post the list I have accumulated …
Just let me know.

Wishing you a great 1st of December!