Sighting Of the Very Rare Rabbit-Mouse

By Ursula Markgraf | March 8, 2011 - 20:40 |December 1, 2017 Sewing
Have you ever wondered what a mouse with rabbit ears would look like?
Come on! You know that you want to know!
I can help you!
I have seen – AND photographed – the very rare and hardly ever seen rabbit-mouse!
Wanna see? 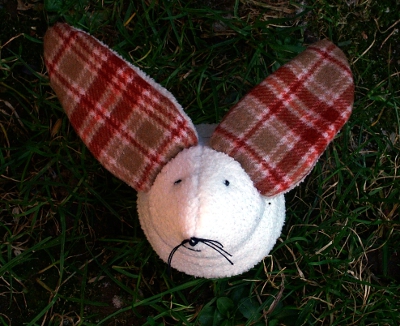 But  no laughing!!!
Or you might scare it away!
Or hurt its feelings. 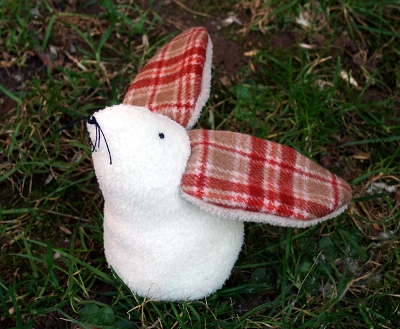 Or my feelings for that matter  ….
So you are wondering how it comes that I get to see such a rare creature???
Really wanna know?
Sure?!
Well, get ready for some really stupid creativeness … on my part …
*
So it all started with this
cute and totally adorable mouse pincushion pattern by Bustle and Sew.
It is CUTE!!!
So yesterday we had such a nice sunshiny afternoon that I thought it would be stupid to spend it inside the flat behind the sewing machine.
Still I felt kinda like DOING something … with my hands … so I thought I might handsew a cute little mouse.
I even had some scraps from cut up fleece sweaters from the kids lying around … perfect!
While I cut out the pattern I got this STUPID weird strange tempting idea.
What if I could make a bunny instead of a mouse?
I just had spent the morning thinking about Easter presents for the kids. That might explain SOME of the weirdness of the idea. Not all. I know. Guess it is just me.
So instead of following the pattern I started drafting some rabbit ears … and cutting them out …
I cut out the fabric pieces and spent a nice relaxing afternoon in the yard handsewing my softie-pincushion-thingy.
Everything was nice and peaceful.
Until I added the ears to the mouse rabbit!
That was when I realized changing the ears to rabbit ears will NOT make a rabbit.
It will make a mouse with rabbit ears! :-/
Yes, I know. You probably would have figured that right from the beginning …
Well, apparently I did not.
I was bummed. I did not know what to do.
I tried to make the face of the mouse rabbit a bit less pointy … but it still did not look like a rabbit.
I was thinking about undoing the ears … making them into mouse ears.
But somehow I could not do it. Do not know why.
So instead I finished up the ridiculous looking rabbit. 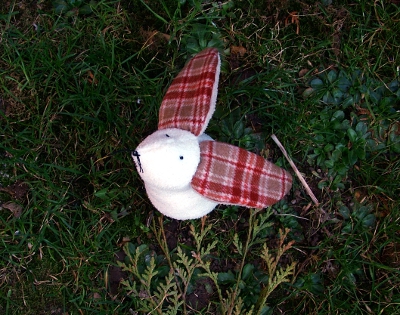 And that is how it happened that I got to photograph the rare rabbit-mouse. :-)
Well, I guess not all projects turn out well. And it was my own stupid fault.
To be honest – I feel kinda attached to the rabbit-mouse.
It kinda looks like it needs an extra-portion of love.
And the funny thing:
Little man – who instantly stole it away –
He LOVES EVERYTHING soft and cuddly! Seriously! He stole a tiny pillow I was making before I could even close the hole from turning!
recognized it as a RABBIT!
He looked at it and scrunched up his nose and made a sniffing noise. Which is his “word” for rabbit!
Yeah, he is not too talkative yet! ;-)
Okay, then again he has just passed the stage where every four-legged animal is a dog.
Now there are cats in his world, too.
So MAYBE – just maybe – it could be that pretty much EVERYthing with long ears to him is a rabbit. But I chose not to think about that too much …
So I guess we are just gonna have a rabbit-mouse living with us from now on.
But the next one will be a mouse! Just a mouse!
So, have you messed up any crafting projects lately? ;-)

4 Responses to Sighting Of the Very Rare Rabbit-Mouse